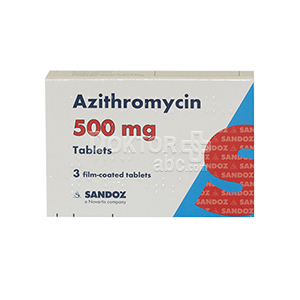 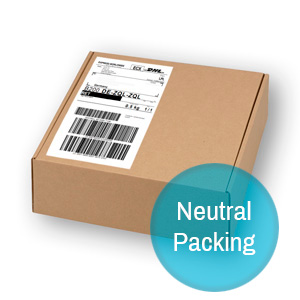 Azithromycin is an antibiotic that may be used to treat chlamydia, a sexually transmitted infection affecting both men and women. The active ingredient is also called azithromycin. Taken orally as tablets, it targets the chlamydia trachomatis bacteria that causes chlamydia. Providing that you don’t have any prior health concerns, our online GPs will usually prescribe a single one-time 1000mg dosage of azithromycin to treat chlamydia.

At DoktorABC you can order Azithromycin quickly and conveniently with an online prescription. Start your order by taking a minute to complete our short medical questionnaire. Our duty GP will immediately check whether Azithromycin is a safe option for you. If your prescription is approved our pharmacy will ship your order for next day delivery. Checkout price includes prescription, medication and next day delivery by UPS courier.

Azithromycin is an antibiotic medication with a wide range of health care uses. It is named after its active ingredient, also called azithromycin. It may be used in the treatment of the sexually transmitted infection chlamydia. A single one-time dose of 1000mg is usually enough to successfully treat a typical case of chlamydia, although it will take a full 7 days to finally cure the infection. Azithromycin works by targeting the chlamydia trachomatis bacteria in your urinary tract and preventing it from growing. Unable to spread, the infection dies. Azithromycin is generally considered to be a safe and effective antibiotic. It is widely prescribed to treat a variety of infections.

What is the active ingredient of Azithromycin?

Azithromycin is named after its active ingredient, also called azithromycin. It is a broad range macrolide antibiotic that is used to treat many kinds of infections, including chlamydia. Azithromycin can be used during pregnancy, and is widely prescribed around the world due to its effectiveness and a low rate of unwelcome side effects.

How does Azithromycin work?

Chlamydia is a sexually transmitted infection caused by chlamydia trachomatis bacteria multiplying in your urinary tract. A single 1000mg dosage of Azithromycin tablets is swallowed as a one-time treatment. Over the next 7 days, the azithromycin antibiotic goes to work by directly targeting the chlamydia trachomatis bacteria. It prevents the bacteria from growing, ending the chlamydia infection and any unpleasant symptoms that it caused. Azithromycin is generally considered to be a safe and effective antibiotic and is widely prescribed to treat chlamydia. Despite its almost complete success rate, you may be advised to have another test for chlamydia a few months after being treated.

Who can take Azithromycin?

Our online GPs are usually able to consider prescribing Azithromycin tablets to anybody over the age of 18 with chlamydia, providing that there are no prior health issues. If you are allergic to azithromycin dihydrate, erythromycin or any macrolide or ketolide antibiotic, you cannot be prescribed Azithromycin.

Azithromycin is safe to use if you are pregnant. If you are breastfeeding, you should mention it when you complete the short online health questionnaire. You may be advised to discontinue breastfeeding for 9 or 10 days after taking your first dose of Azithromycin. Overall, the medication generally causes few unwelcome side effects and has a high success rate in the treatment of chlamydia.

What doses of Azithromycin are available?

When Azithromycin tablets are used to treat chlamydia, the usual prescription is for a single one-time dosage of 1000mg. This is typically taken as two 500mg pills. This single dose of antibiotics takes seven days to completely clear the chlamydia trachomatis bacteria from your system.

It is important to remember that you may still be infectious during this seven day treatment period, even if any symptoms of chlamydia have already disappeared. It is safer to either not have sex, or to use a condom.

How do I take Azithromycin?

It is important to take Azithromycin exactly as instructed by your online GP. Usually, this will mean swallowing a one-time 1000mg dosage of tablets with a glass of water. Unlike with some antibiotics, there is no need to take a daily or twice daily course of treatment. Once you have taken your prescribed Azithromycin tablets, the antibiotic will begin to target the chlamydia trachomatis bacteria almost immediately. It will take a full seven days for the infection to be completely cured.

Can I take Azithromycin and drink alcohol?

Our online GPs generally do not recommend taking alcohol with any prescription medication. There are however no specific manufacturer’s health warnings against drinking alcohol while using Azithromycin. There is however a possibility that if you suffer from any unwelcome side effects, these may be exacerbated by alcohol consumption.

What are the side effects of Azithromycin ?

Important Your Azithromycin tablets will come with a patient leaflet giving detailed information about the medication, its ingredients, possible side effects, and contraindications. Please read this leaflet carefully before you take any tablets. Keep the leaflet with the medication for future reference.

If you take Azithromycin exactly as directed by our online GP you are unlikely to experience any significant unwelcome side effects. A small minority of patients may experience some minor side effects.

Very common (may affect more than 1 in 10 people):

When not to take Azithromycin?

Do not take Azithromycin if you are allergic to azithromycin dihydrate, erythromycin or any macrolide or ketolide antibiotic. When you complete the short online health questionnaire it is important to tell us about any relevant medical issues, and any medications that you are using. If we cannot prescribe Axithromycin, our duty GP may recommend Doxycycline as an alternative treatment. If any of the following apply, we may not be able to offer you a prescription for Azithromycin, or you may have to take special precautions while using the medication.